Two days before Christmas we reached the quiet village El Chalten. Since this place serves as a base for hiking around Mount Fitz Roy, it is not as crowded as El Calafate and it’s something quiet and leisurely pace. El Chalten is a small community in southern Argentina. It is in the Lago Argentino Department in the province of Santa Cruz near the Chilean border at the northern edge of Los Glaciares National Park.

„You haven’t really been somewhere
unless you have been there on foot.“
– Johann Wolfgang von Goethe – 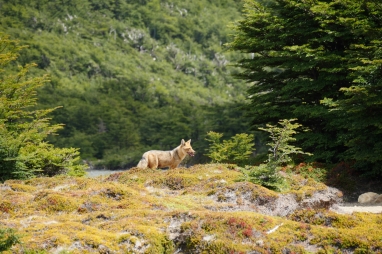 After we had decided to skip the glacier hike, we planned a hike at the foot of Mount Fitz Roy with Vanessa as an alternative. It dominates the entire National Park with a height of 3.406 meters, and it is one of the highlights in Patagonia for climbers from around the world. The National Park offers several well-groomed paths which can be combined to different routes. We wanted to get on the 300-meter high plateau at the northern end of the main street and then walk from Fitz Roy left towards the Rio Fitz Roy. The valley where the Rio Fitz Roy flows through is the access to Glacier Grande and a very good way to run a round circus for us and exit the National Park at the southern end of the main road again. Overall about 20 kilometers.
Before we left for our walk the next day, we went for a little walk to a nearby waterfall the night before. Fortunately we had chosen the right moment and could see the last sunrays of the day in the cascading waters.

The next morning after breakfast we started towards the National Park. Jo, Murray and Colin had joined us and so we went in sunny weather on the way. The well-developed roads led us at the beginning of 300 steep vertical meters on the plateau which extends at the foot of Fitz Roy. From here our view rambled of the river traversed valley in which the village of El Chalten spreads like a painterly blob. Our route always gave us the possibility to see the Fitz Roy at various vantage points. From a distance we could see the clouds dancing around the top of the mountain and denied us a clear view. The granite mountain was called „Chalten the Smoking“ by the Tehuelche Indians not without a reason. This fact should not change until our lunch break. When we bit in our salami sandwiches between the two lakes „Laguna Madre“ and „Laguna Hija“ we could have a look at the top of the mountain. Still fascinated by the sight we needed a second to realize the fox 15 meters next to us. Full relaxed and without fear it ran past us looking for something to hunt. Andi, who realized it first, took the camera and run after the fox. After a few minutes he came back beaming and showed the resulting images.

After the landscape in the morning mainly consisted of shrubs, bushes and small streams we plunged into an enchanted forest. Overgrown with moss trees, cairn and the rustling of tree tops enchanted us. We got into this dense forest the plateau down again with a smile and came to the valley where the Rio Fitz Roy from Grande Glacier flows to El Chalten. We stepped out of the forest and walked through a field of man-sized trees the last few kilometers back to El Calten. After we had stripped our walking shoes and enjoyed the hot water of the shower, our tired limbs realized the kilometers. 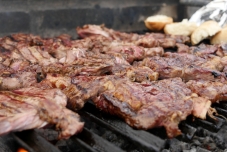 That day we would normally get up at home in the morning, decorate the tree in the house, prepare the Christmas dinner and sit down in the evening with our family together and celebrate. We were, however, far from home, the day was somewhat different. We had no Christmas tree available and Christmas Eve was already over for the family due to the time difference. However there was one thing we could organize to celebrate the day here in Argentina and that was a decent Christmas barbecue! Since we had no big plans for the day we took over the organization together with Claire, Alex and Vanessa and the shopping with the help of our Dragoman Guides Emma and Jaime. After the girls had made the side dishes during the afternoon, Alex and Andi did the barbecue and the 35 chorizo sausages and 20 steaks made their mouths water. With a full belly and a happy Dragoman crew we all went sleeping, because a new eventful day was waiting for us.

Salute from far away,
Tina and Andi from Itchy Feet